Built to last, Ford pickup trucks outsell all other vehicles in their class year in and year out. Between the midsize Ranger and the larger F Series models, there's a Ford pickup for every job, large or small. Both trucks come with lots of standard or available comfort, convenience, and technology features, and both offer exceptional performance and utility. While the two trucks have plenty in common, they also have many differences, as well. Here's a look at their similarities, and their differences in several relevant categories. 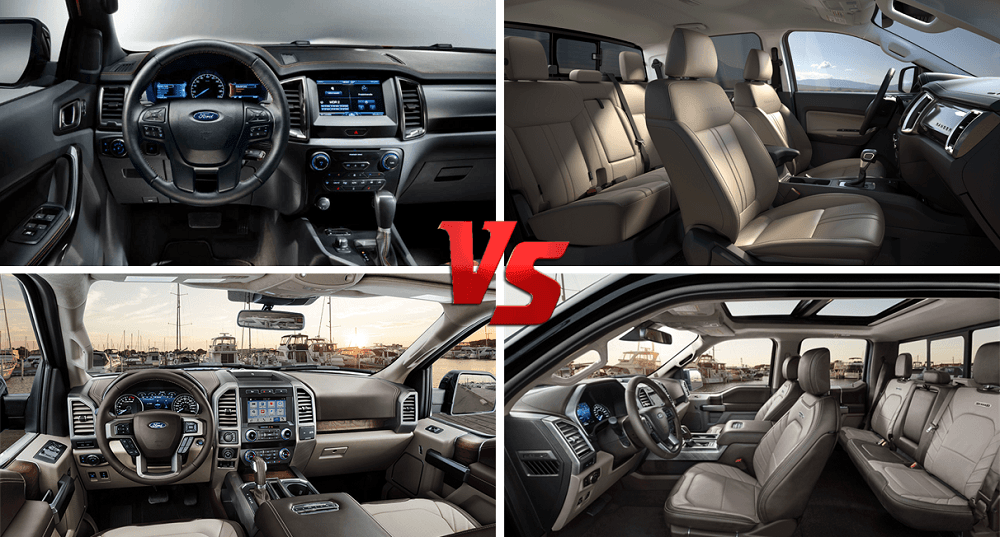 Ford makes the new Ranger pickup in three trims - XL, XLT, and Lariat - while this year's F Series buyers have seven options to choose from - XL, XLT, Lariat, King Ranch, Raptor, Platinum, and Limited. Cab configurations include SuperCab and SuperCrew for the Ranger, and Regular Cab, SuperCab, and SuperCrew for F Series models. Maximum conventional towing capacities come in at 3401 kg for the Ranger, and 5,987 kg for F Series editions. The Ranger has a max payload of 748 kg, while F Series models handle almost double that at 1,483 kg. The Ranger comes with either a five or six-foot bed, while F Series models come with five-and-a-half or six-and-a-half foot beds, depending on the cab configuration. The Ranger does considerably better when it comes to fuel economy at 11.8 City/9.8 Hwy/10.9 combined (L/100km), while F Series models vary from 11.9L/100km City/9.4L/100km Hwy/10.8L/100km combined on the low end, to 15.1L/100km City/11.6L/100km Hwy/13.5L/100km combined at the high end of consumption.

While the Ford Ranger and Ford F Series will each have their own audience, one fact is for sure, the world's best selling pickup trucks get better and better year in, and year out.